Where do Michelmas daisies come from? 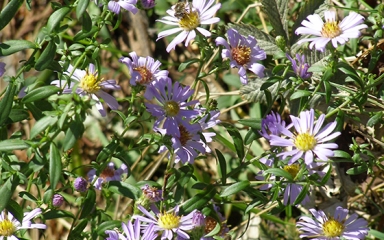 I can remember the mauve Michaelmas daisies in my parents’ garden every autumn in the UK and thought I was very safe in mentioning these flowers in my Wars of the Roses novels since the name originates from St Michael’s Mass. In the Middle Ages, Michaelmas was a feast day in September dedicated to the Archangel Michael and today’s Roman Catholic Church gives St Michael the honour of being the patron saint of grocers, mariners, paratroopers, police, and sickness. A rather wide portfolio!

Imagine my surprise, however, at seeing Michaelmas daisies flowering wild in Canada’s Rocky Mountains this September. Had they been taken over to Canada by early colonists or were they locals? And this made me wonder whether I was wrong about them growing in English gardens in medieval times?

According to Wikipedia, Michaelmas daisies belong to the Aster family and Aster amellus is considered ‘an Old World species’.

Maggie Campbell-Culver, the author of The Origin of Plants (Eden Project Books) tells us Aster tradescantia was brought to the UK by John Tradescant Jnr in the 1630s but received an unenthusiastic reception so perhaps the specimens looked rather battered after the sea voyage or just did not survive long in Britain.

According to Daily Mail, the North American Aster novi-belgii was named as a species in 1687 but did not become popular for garden use until Queen Victoria’s reign. The name 'novi-belgii' is puzzling as no one knew of anywhere called ‘New Belgium’ but the name stuck. Apparently the seeds were first collected in the New York area by a German botanist from the University of Leiden in Holland, Paul Hermann. Maybe he intended to call them ‘New Holland asters’ but was rather lacking in history and Latin and got the name wrong. (Daily Mail)

A. novi-belgii was introduced from North America into Britain in 1710. In England these plants bloomed at the same time as St Michael’s Day was celebrated, and so they became associated with the festival of Michaelmas and were given its name.

The ‘New World’ aster cousins have now been reclassified as a different species.

So, phew, there were Michaelmas daisies in England in the Middle Ages but it only goes to show historical novelists should never takes things for granted just because they are familiar and common place.