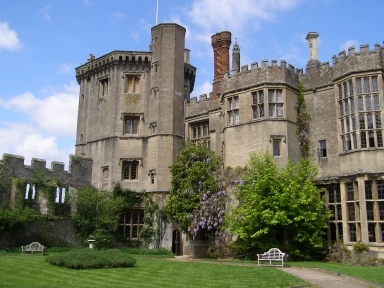 Just north of Bristol is the modest town of Thornbury, and for most users of the M5 motorway, it’s just a name on the road sign. Beyond the town, however, lies a palace that was meant to rival Hampton Court. It belonged to Henry VIII’s cousin and rival, Edward Stafford, 3rd Duke of Buckingham. If Edward had his sights on Henry’s crown, his ambition came to an abrupt halt when he was arrested at Thornbury in 1521, taken to the Tower of London and beheaded for treason.

I was keen to visit Edward’s beloved Thornbury as he was one of the characters in two of my novels – the boy Ned – in THE SILVER BRIDE and THE DEVIL IN ERMINE. Some readers might be more aware of him as the duke beheaded at the beginning of Philippa Gregory’s THE OTHER BOLEYN GIRL or in the early episodes of TV series THE TUDORS.

Today Edward’s palace is now a very up-market hotel but the public can explore the beautiful grounds. We were fortunate to meet a receptionist who not only appreciated the history but was delighted to show us round. She’d even read some of my novels!

There are no visible signs of the medieval castle that once stood here but archaeologists have excavated the fine tiled floor of the great hall. Because of cost to maintain it, the tiles were re-covered with about a foot of turf and, sadly, now lie unseen beneath one of the hotel lawns.

Edward Stafford made Thornbury his chief residence and began rebuilding in 1511. The central gatehouse, corner towers and newfangled brick chimneys have all survived but a much later building nestles behind the splendid oriel windows of what was Edward’s new hall. The luxury bedrooms of the hotel (for those that can afford them) offer fourposter beds and tapestried walls so tons of atmosphere. We had a peek into some of them.

Originally, a covered walkway ran atop a high wall that linked the duke’s apartments with the neighbouring church grounds and would have overlooked the gardens. The latter are beautifully maintained and still retain a lovely early Tudor atmosphere. It is easy to imagine a lady in a brocade kirtle strolling through one of the hedged archways.

Around the periphery wall of the grounds, Edward began to build lodgings for a great number of retainers. Probably many of them were mercenaries, who might be used in a rebellion against the king.  Maybe, since they were soldiers, it was considered better to lodge them away from the main palace.  At first glance, these buildings look like they’ve been ruined at a later date by Oliver Cromwell’s Roundheads but that was probably not the case. Because of the duke’s sudden arrest on Henry VIII’s orders and the palace being seized by the crown, they were never finished. The castle was returned to the Staffords in the reign of Mary but never reoccupied until it was taken over by the Howards who began its restoration in the nineteenth century.

The hotel contains a small Tudor Hall and kitchen. Even on a very cool day, these rooms have a lovely warm feel about them which is unexpected and which people remark on. However, like most ancient palaces, Thornbury does have ghost stories. The receptionist told us about the misogynist poltergeist who knocks things about when women are in the staffroom but behaves when there are no females present. The staff call it Jasper (after Henry VII’s uncle?) and it seems to respond when it is told off using its name. Then there’s a man in black and a woman in grey who have been seen in the bedrooms area and other people relate glimpsing a lady with greyhounds. Much less believable is the story of ghostly children who appear when the hotel enjoys a firework night.

Edward inherited Brecon Castle and Thornbury from his father, Henry Stafford, Richard III’s erstwhile ally and cousin, who was executed for treason in 1483. After the Tudor takeover in 1485, Edward’s mother, Katherine Woodville, married Jasper, Earl of Pembroke and Duke of Bedford, Henry VII’s uncle. In August 1486, wardship of Edward and custody of his inheritance was given to Margaret Beaufort, the king’s mother, and her right to revenues was made retrospective from September 1485. Thornbury, however, was retained by Catherine Woodville as part of her marriage jointure.

The crown levied extensive fines for Katherine’s remarriage in 1596 and then later when Edward entered his inheritance before he came of age. Because of his claim to the throne as a descendant of Edward III, Edward was always a potential threat to Henry VIII. He did hold the post of Constable of England and showed flair as an efficient administrator but Cardinal Wolsey blocked his political ambitions and increasing influence.  He managed to survive until 1521. King Henry must have maintained Thornbury in tis luxuriant state after that because  in 1535 he and Anne Boleyn enjoyed a honeymoon there for ten days. The dukedom was restored to Edward’s son  by King Edward VI.

Although Edward Stafford was not the most popular man, it is possible to feel sorry that he was never able to complete his palace and grow old enjoying its beautiful setting. The property was on the market in 2016 for £8.5 million. Fortunately, it has continued as a hotel so that visitors like us can still have access to the grounds and be able to appreciate its unquestionable splendour.