The case of the missing head 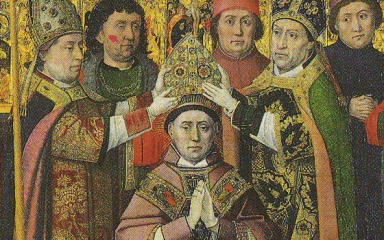 I thought you might be interested to hear about The Case of the Bishop’s Missing Head. Some years ago I came across the fact that Cardinal John Morton’s fine tomb in Canterbury was empty. I haven’t much time for Morton, who was one of King Henry VII’s advisors, and he wasn’t particularly flavour of the month among his contemporaries either. His policy was: if you flaunt your wealth, you can pay more tax, and if you are going round looking poor than you must be a miser and you can also pay more tax. It was nicknamed ‘Morton’s Fork’.

So why was the tomb empty? Well, Morton had been buried in a shallow grave in the cathedral crypt. During the English Civil War, the metal plate marking his grave was taken by the Roundheads for recycling as munitions, and the unprotected flagstones began to crack. By the reign of Charles II, people were pilfering Morton’s bones and the Archbishop of Canterbury’s’s nephew, Ralph Sheldon, suggested to his uncle that the skull should be removed and placed in a leaden box for safekeeping. By the 1680s, it had become a Sheldon family heirloom.

The skull seems to have ended up with a Jesuit college in Liège. The Sheldons, like many Roman Catholic families, had sent their sons overseas to be educated because Roman Catholic schools were not permitted in England and maybe one of them donated the skull to the college. During the French Revolution, the school shifted to England and took up permanent residence in an Elizabethan mansion in Stonyhurst, Lancashire, courtesy of an old pupil, Thomas Weld of Dorset, who had inherited the property.

When I wrote to Stonyhurst College inquiring if they did indeed have Morton’s head, the school authorities were wondering the same question. Feeling a duty of care, they had just sent off the skull for analysis to the Regius Professor of Forensic Science at Edinburgh University.

Professor Busuttil in his unpublished report concluded that the skull belonged to ‘an elderly well-nourished Caucasian male who died five centuries ago’. The skull showed that the man had not suffered from any protein or vitamin deficiency and therefore it was ‘likely that he lived in the higher socio-economic strata of his society’. The professor found there was no evidence of ‘osteoporosis or osteroarthrosis in the tempero-mandible joint sockets’ and this suggested that the skull belonged to a man not older than sixty-five to seventy years old.

I did some research on the Weld family in the Dorset archives. They were Roman Catholic and family members had collected memorabilia and relics but there was no mention of this particular item being donated to Stonyhurst. The college did, however, at various times, have memorabilia of other famous Roman Catholics such as Sir Thomas More, so it was all quite feasible that the Sheldons might have donated the skull to the college collection.

Morton was reputed to have been well into his seventies when he died in 1500. I have been unable to find out the year of his birth but examining his career indicates that he must have been born before 1430. The fact that his head is actually missing from his grave also supports the tradition that the skull may well be his.

Morton was the great enemy of King Richard III and seduced the king’s greatest supporter, the Duke of Buckingham, to rebel against Richard.

What an ending for the three of them! Richard’s bones under a Leicester car park, Buckingham’s ghost is reputed to haunt Debenham’s department store in Salisbury and Morton has been decapitated by posterity.

And the end of the story? Archaeologists have found Richard’s skeleton in the carpark site!

I don’t know if Stonyhurst College decided to send the skull back to Canterbury Cathedral advising them to take better care of it this time, or whether the school authorities buried the skull with an inscription stating its history. Presumably, after centuries of adventure, the head is now at peace.