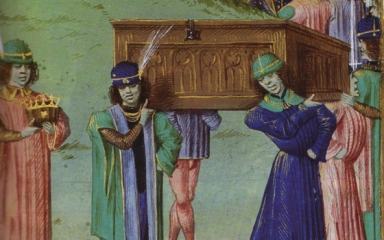 I was really very excited about this. Those of you who have read The Knight and the Rose may recall the horrible fate of King Edward II’s adviser (and possibly his gay lover), Hugh Despenser the younger, who was hanged, drawn and quartered in Hereford in 1326. So you can imagine how fascinating it was to read Laura Clout’s article on the discovery of his body (well, parts of it) in the UK Telegraph.

Apparently, investigations of the remains found at Hulton Abbey in Staffordshire in the 1970s show that the man’s body was decapitated, chopped up in a manner related to the punishment of quartering plus there was evidence of a wounding in the stomach, all consistent with the manner of Hugh’s death. It is known that his head and a few bones were given to his wife for burial and these are the parts that are missing from the Hulton remains. The carbon dating and other evidence, according to anthropologist Mary Lewis, points to the remains being that of Hugh Dispenser.

Here’s a quick run through the background to Hugh’s downfall:

King Edward II was famous for his male favourites. After Piers Gaveston was executed by the barons in 1312, the vacuum in Edward’s affection was gradually filled by the two Hugh Le Despensers – father and son. An ignominious defeat at Bannockburn in 1314 (when the Scots led by Robert the Bruce not only routed the English army but seized all their valuables) was a disaster for Edward and his close supporters. He and Hugh the younger fled for their lives. The queen was abandoned at Tynemouth and left to fend for herself.

For a while after the battle, the Despensers’ enemies among the barons held sway and both Hughs were banished from the court, but then in 1322 the King’s army won a victory against the rebel lords at Boroughbridge in Yorkshire (the beginning of The Knight and the Rose) and the leader of the rebels, the King’s cousin, the Earl of Lancaster was beheaded.

Edward was able to restore his friends’ fortunes. Hugh the elder became Earl of Winchester. Hugh the younger, now in his late thirties, sought to consolidate his power base in Wales. He also supervised the reform of the English Exchequer, made the King’s Chamber into an efficient department of state and reorganised the English wool industry.

Nemesis was waiting. The man who was to finally bring about the Despenser’s downfall was the handsome and capable Sir Roger Mortimer. He was a prisoner in the Tower of London but with the help of the rebel Bishop of Hereford, he managed to escape to France and there he bided his time.

High Dispenser’s greatest enemy was Edward’s neglected queen, Isabella, sister to the King of France, and in 1325, he and Edward permitted her to go across the Channel to negotiate with her brother. The big mistake was that they made was to let thirteen-year-old son, Prince Edward, the heir to the throne, go with her. Of course, Isabella met up again with Mortimer and they became lovers. Isabella was no longer a meek young princess but an assertive woman in her mid-thirties bent on revenge and she had an alternative king in mind.

She arranged a marriage for her son with Philippa, the daughter of the Count of Hainault and Holland, and with help from the new in-laws, she amassed an army to invade England in Prince Edward’s name.

They landed near Walton in Kent in September and the majority of the English barons joined their force. Isabella achieved extraordinary success or a woman. Her army seized London and drove the King and his supporters westward. Sixty-four year old Hugh the elder bravely made a stand at Bristol to give his son and King Edward time to escape. The castle garrison rebelled against him, he was forced to surrender and executed as a traitor. His head was sent for display in Winchester and his body was thrown to the dogs.

Edward and Hugh the younger fled into Wales and several times tried to sail to the Island of Lundy but adverse winds drove them back. Eventually they were captured and High was bought to Hereford for trial. One account, that I came across when I was writing The Knight and the Rose, said that when Hugh was brought to the scaffold, his captors had crowned his head with nettles and covered his body with religious writings. He was hanged on a 50 feet high ladder before the Queen, Mortimer and the Prince. Parts of his body were sent all over England for display and his head was stuck on a pole on London Bridge.

Edward II was forced to abdicate and died in Berkley Castle, probably murdered on the orders of Mortimer. Mortimer got too big for his boots and started to treat the young King Edward III in a less than respectful manner. He was arrested and executed. Isabella went into comfortable retirement.

Edward II, the play by Christopher Marlowe tells the story of this unpopular king and is worth seeing if you ever have the opportunity. I saw Ian McKellen play King Edward in London in 1970 and it was the most powerful stage acting I have ever seen. And if you want to get a sense of Hugh the Younger’s wealth and power, stand in the great hall of Caerphilly castle. Yes, this immense castle is in ruins now, but imagine it in all its glory.

One cannot help feeling a sense of tragedy in the horrible punishment meted out to Hugh the Younger. If only he had not been so acquisitive and high handed. Both he and his father had great administrative talent. Perhaps if he had served a king of more even temperament with better leadership skills and a dedication to serving England in a more responsible manner, he might have earned himself a better epitaph.