About The Golden Widows 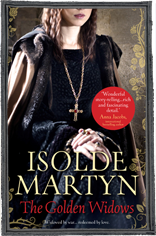 In the winter of 1460–61, it would have been hard to predict who would triumph in the bloody encounters between the Houses of York and Lancaster. For the wives of the noble lords caught up in the struggle, wondering whether their menfolk would survive the battles, must have caused much anguish. For those women whose husbands died on the losing side, there was the likelihood of their children being disinherited.

In The Golden Widows, I wanted to explore the experiences of such women and focus on a real historical woman from either side. Young Kate Neville is the sister of Warwick the Kingmaker and her husband’s family, the Bonvilles of Devonshire, are all fighting for the Yorkists. She has a six month old daughter.

On the other side is Elysabeth Woodville, Lady Grey, who is in her early twenties with two young sons. Her husband is a supporter of the House of Lancaster. What will happen if she finds herself the widow of a traitor and her sons’ inheritance is seized by the victors?

Tucked away in the novel are several other older widows: Elysabeth’s materialistic mother-in-law, Lady Ferrers; Kate’s feisty aunt, a woman in her sixties who is looking for a fourth husband; Lady Bonville, Kate’s husband’s grandmother, who is determined to protect Kate and the baby, and Kate’s mother, who cannot overcome her grief.

For some of these women, marrying again was a solution to their predicament but that was possible if you had something to offer like important family copnnections or the guardianship of a wealthy heir. But if you did not have anything to offer, what man would want to take on the penniless wife of a traitor?

Readers may know Elysabeth already from reading other novels or watching the TV series The White Queen but The Golden Widows focuses on her years of struggle and underlies what an exceptional woman she was. What other queen in English history had such a rags to riches story?

I hope readers enjoy Kate and Elysabeth’s struggle to protect their children and find happiness during one of the most turbulent times in English history.