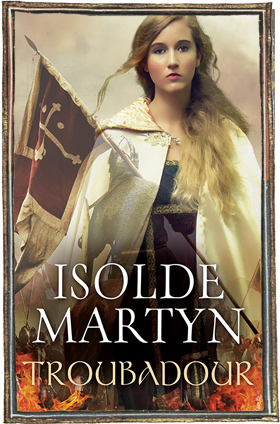 Inspiration for this novel came from staying in Languedoc in southern France. It’s the beautiful land of the troubadours but it was also witness to some terrible injustices. In 1209 Pope Innocent III persuaded the King of France to permit an army of northern knights to join a crusade against the south. The pope was angry because there was a heretical sect called the Cathars or Albigensians who had rejected the teaching of the orthodox church, and he wanted them destroyed. The soldiers who joined the crusade, however, were more interested in looting and a land grab than in Christian principles.

Everywhere we went, we heard stories about this crusade and how it devastated the southern culture. What would it have been like to face that army? This gave me the idea of a noble lord trying to save his people. Should he be a real historical figure or a fictional character?

The weekend we visited Carcassonne, my imagination was fired by the wonderfully restored medieval citadel. Standing within the walls which are dominated by watchtowers, you can feel such a vibrant sense of the past. There’s a cathedral and C12th castle and it was easy to imagine the narrow streets crowded with citizens watching their noble lord ride in procession. The perfect setting for a hero! Should I use a real historic figure? Well, the poor Vicomte de Carcassonne lost everything and died in the castle dungeon. He actually tried to join the crusade to save his lands but they turned him down. No, I wanted a more heroic figure and so I created Richart, Vicomte de Mirascon, and the fictional city-state of Mirascon, which is loosely based on Carcassonne.

And the woman in my story? I wanted a servant who gets mistaken for her mistress so Adela, my latest heroine, is resourceful, intelligent and courageous. She’s the daughter of a lady, who was rejected by her family because she fell in love and ran away with her father’s chaplain. Educated by her father, Adela has dreams of being useful and respected and she seizes the opportunity to join a bridal party heading for Mirascon. Surely in the land of the troubadours, life may be better.

In this scene, Adela, a hairbraider, is mistaken for the bride of Richart, Vicomte de Mirascon. She and the laundress, Maud, are the survivors of a brigands’ attack on the bride’s retinue.

GLISTENING in gold upon the rippling banners of blue ciclatoun was the crossed-swords insignia of Ricart, Vicomte of Mirascon. He had dispatched help but it had taken hours and there was no need for the musicians.

‘Christ save us!’ whispered Maud, falling to her knees, her lips drawn tight in awe. ‘He’s sent a blessed army.’

‘They’ve probably been in readiness. We were supposed to arrive several days ago, remember.’

The foremost riders astride fine mounts were of noble birth, judging by their golden adornments and clothes of costly scarlet. Behind them, mounted on amblers and sorels, the lesser in rank were clad in dull reds of cheaper dye, with perse blue chapes and silver badges stitched upon their tunics. In their midst Adela glimpsed the cream canopy of a women’s chariot with several other wagons in its wake. The procession slowed and the loping minstrels re-assembled and began to play once more.

Where was Ricart of Mirascon? The lord in charge was staring at her through narrowed eyes. Rebelliously, Adela stood her ground, hugging the coffer to her breast. She was no peasant to grovel before this man but it needed every drop of courageous blood to keep her shoulders straight and look him in the face.

‘What if they don’t believe us?’ wailed Maud, tugging at her skirt.

‘We had better make sure they do.’

‘Well, from now on I’m speaking naught but English, that way they can’t question me about wot happened to my poor lady.’

As the noblemen walked their horses closer, Adela’s confidence teetered. Oh, there was such hauteur in their faces. Her starved gaze beheld the glistening saddlecloths, the jewelled collars across the men’s shoulders and the expensive scabbards that gleamed upon their thighs. Their riches made her feel even more like a tightened tabor skin—primed for a beating! Would they believe her? But what if she could show her learning, pass for a companion of the dead woman? She wanted respect not further servitude.

The procession halted, close enough for her to see the arching of eyebrows. Lips, framed by clipped moustaches and neat beards, jutted warily. Irritability definitely creased the forehead of the noble who led the company. He kneed his white horse forward, clearly not prepared to dirty his boot soles unless it was worthwhile.

Adela curtsied with dignity, her curled hand at her heart, and it was the southerner broke his gaze away first. At some imperceptible command, a groom ran up to hold his master’s horse and the elegant lord dismounted and came to stand before her. He coughed a fraction disdainfully as if to show his companions that his first disgust at these strangers might be justified.

‘Whom am I addressing, seigneur?’ Adela replied in perfect Norman French.

‘Seigneur Tibaut, I regret to tell you that we alone survived the journey.’

‘Dieu!’ He recoiled. ‘Pestilence?’ His gloved hand darted up to defend his nostrils.

‘No, seigneur, brigands. We were set upon several days ago and have been forced to make the rest of the journey on foot.’

As Sir Tibaut gravely repeated this to his companions, she almost felt sorry for them. All this splendour to no purpose. At least the cruel tidings had punctured their arrogance. Observation of the bruise on her forehead, the dust on her feet, and her far from pale complexion was now performed with sympathy.

‘My lord vicomte will be most distressed to learn of this misfortune,’ Sir Tibaut assured her. ‘Have no doubt that he will hunt these felons to the death.’ He unfastened a leather flask from his belt, removed the stopper and offered it courteously. The greatest gift she could ask for.

Adela received it solemnly, restrained herself from taking more than a few swallows and then before his haughtiness could object, she passed it to Maud.

‘Have the dowry chests arrived?’ she asked to distract him.

‘Yes, indeed, ma dompna,’ he began and then remembered to slide once more into the langue d’oeuil of northern France. ‘They arrived from Gascony two days ago.’

‘I am relieved to hear it,’ she answered.

Her innocent reply seemed to spark some decision in Sir Tibaut. He stepped towards her, and crooked a swift, imperious signal to the company behind him. With a rattle of harness and babble of astonishment, the southern lords slid from the saddles and a clutch of demoiselles hatched from the curtained chariot. Maybe they were going to turn the procession around but then she realised her error. Everyone was making obeisance to her.…

Before she could explain that she was not Lady Alys, …poles and canvas were being plucked from the wagons.

‘Well, I never did,’ Maud whispered in English, clearly feeling it was safe to rise to her feet. ‘You certainly put ’em in their place. Is that ’im?’

‘No, but I think I’ve just made a monstrous error. I believe they’ve mistaken me for Lady Alys.’

Maud shrugged. ‘I don’t care whether they think you’re the Queen of England, just ask ’em for some ruddy food.’

Adela was too concerned to answer. The demoiselles were advancing on her with battle-phalanx determination in their faces. ‘Maud, this is getting unfortunate.’

‘Aye, look at them pails being filled. I reckon you’re about to experience a proper sponging.’

Adela tried—well, not the laundress part.

‘Later, later,’ an impatient Sir Tibaut assured her and, regaining possession of her hand, he joyfully surrendered her to the women.

The unclothing was embarrassing, not to mention the attention with the Castilian soap, but thank Heaven she knew the bathing procedure (she’d usually been the one with the jug), and if she closed her eyes as Queen Isabella usually did, it would make the these twittering maidens disappear.

Her exhausted body welcomed the lap of the perfumed water and for a few wonderful moments, she forgot her predicament and enjoyed the pleasure of being a noblewoman, of having her hair washed, scented and wrapped in soft cloths. It could be like this every day if she was a real lady—violet and rose petals bobbing round her breasts and the grimy existence of Adela de Handley washed away. With regret, she allowed their gentle hands to compel her to her feet and closed her eyes in delight at the soft towels that embraced her. Oh to be Lord Ricart’s bride!

She opened her eyes with a start as something furry touched her thighs. A demoiselle, armed with a rabbit tail of powdered myrtle proceeded upwards, whisking across Adela’s nipples and beneath her arms. Oh Heavens, despite her dilemma, the faux Lady Alys laughed. She had not known her breasts could blush. Encouraged, her ardent attendant giggled in appalling northern French. ‘Perhaps, you are thinking of your wedding night, madame?’ She repeated her jest in her own tongue and there was immense merriment.

Still giggling, they brought Adela clean underlinen, a kirtle of robin egg blue and Cordovan leather slippers stitched with tiny marguerites. This was getting out of hand.

‘I must explain … ’ Adela began again but they took her reluctance for displeasure at the garments and it was necessary to smile once more like a cheerful stone saint and be accepting.

Sir Tibaut was impatient to have her loaded into a chariot, but at least he offered her some sweet wine, figs and cakes.

Maud looked tidier and better tempered when she appeared at the back steps of the chariot ready to elbow her way on but the demoiselles made room.

‘I scrounged some of your bathwater,’ Maud muttered. ‘You haven’t told them yet, I gather?’

‘No, I keep trying.’ At least they both smelled sweeter.

‘Trouble is you plaguey well scrub up like a princess an’ they won’t like it when they found out you ain’t.’

Forced to flee the English court after the lecherous King John attacks her, Adela, the queen’s hairbraider, finds employment in the entourage of Lady Alys. Alys is on her way to marry the Lord of Mirascon, a fiefdom in southern France. However, the south is under threat from Pope Innocent III’s military crusade against the heretics.

After trying in vain to rally his fellow lords against invasion, Richart, Vicomte de Mirascon, makes an alliance with King John. A political marriage to the Lady Alys – the king’s discarded mistress – will allow Richart to safeguard his people from a merciless land grab and cruel slaughter.

When the bridal party is ambushed, Adela is mistaken for her dead mistress by the people of Mirascon. Adela knows she must tell Richart that she is not his betrothed, but as she is dragged deeper into the deception, she is also powerfully drawn to the beleaguered man trying to protect his people and his culture. Adela is recognised by the dwarf Derwent, Richart’s English jester, who seems willing to keep her secret for the time being. Yet as suspicion builds up against her, paying with her life seems inevitable.

As the pope's savage army marches south, can Richart and Adela overcome a web of deceit and treachery and evade the bonfires of the crusaders, or will their land of troubadours and tolerance be destroyed forever?