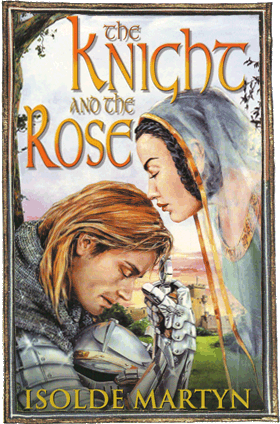 A lovely medieval, rich as a stained-glass window.
US author Jo Beverley

Romantic Book of the Year Award 2001
Romance Writers of Australia 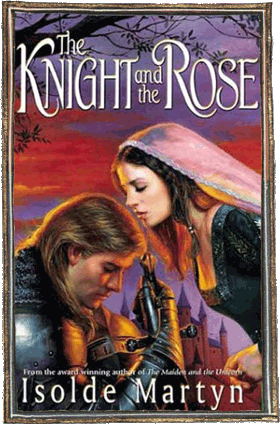 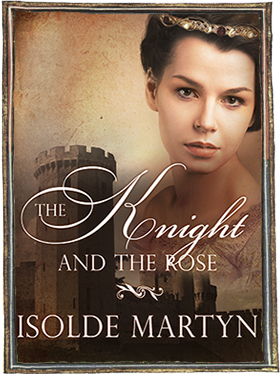 The Knight and the Rose

Published in Australia, the United States and Germany

Inspired by a medieval court case, The Knight and the Rose interweaves fact and fiction into a rich and vibrant tapestry of love, betrayal and political intrigue.

Trapped in marrige to the vindictive Sir Fulk de Enderby, a veteran of the wars against Robert the Bruce, Lady Johanna FitzHenry has one last chance to escape.If a stranger can be found who is willing to swear to a court that she was secretly wed to him before her match to Fulk, Johanna will be set free.

Fleeing bounty hunters after the Battle of Boroughbridge where the rebels have been defeated by King Edward II's army, the last thing Geraint needs is to be blackmailed into pretending to be a long-lost husband. But he has no choice. If he refuses, he and his wounded companion will be handed over to the King for hanging drawing and quartering as traitors.

At first the sparks fly as he and the bruised Johanna try to invent a past together, but Geraint gradually realises that this feisty lady is worth healing. With good humour and kindness, he slowly mends her courage and self-esteem.

Though the ploy goes according to plan, Johanna's hired husband leaves many questions unanswered. Why will he not tell her his real name? What is her mysterious rescuer's secret?

Joanna's attempt to discover the truth sweeps her up into the highest echelons of the English court and into a dangerous web of political intrigue as Queen Isabella leads the barons into rebellion against the King.

A historian friend of mine told me about the case of an ordinary medieval woman obtaining a divorce.

‘Are you serious?’ I exclaimed. ‘Look at the trouble Henry VIII had.’

‘I'll send you the journal article,’ she promised.

And it arrived in the post a few days later, the real life story of how a woman escaped a hateful husband – a medieval 'Green Card' scenario. The woman's family had paid a stranger to pretend he had married her secretly before her real marriage took place. The pair had to stand up in a church court and pretend they had fallen in love.

So I took the bones of the story and upped the pressure. I made the heroine a high-ranking lady with a dowry and I made the hero a rebel blackmailed into playing the role of lover because he was on the run from the king's men. The subplot is an echo of the main story – the unhappy Queen Isabella rebelling against the rule of her husband, the gay king, Edward II and his favourite.

‘Mother, are you out of your wits?’ Johanna sank down on the linen chest in her mother's chamber after midday dinner, her thoughts whirling like blustery blown windmill sails. She regarded Lady Constance scathingly.

‘Am I to understand that you opportuned some man of unknown origin in our deer chase this morning and offered him money to be my husband! Jesu, madam, the knave might be blabbing the tale out to half the shire by now if he has sufficient ale to make his tongue gallop. What possessed you?’

‘Your wellbeing for a start,’ muttered her mother reproachfully, ‘and I did not opportune him. We first met a few days ago when he tried to rob Father Gilbert.’

Johanna's eyes widened further. For an instant, she could not find words to clothe her feelings. ’Only tried!’ she exclaimed. ‘Jesu preserve me, now you are admitting he is not only an outlaw but a stupid one as well.’

Her parent sniffed defensively. ‘He is a poor scholar and he was desperately hungry.’ Was that supposed to make her feel more comfortable about the fellow?

‘And a failed one, by the smell of it.’ Johanna rose and paced between the bed and door. Lady Constance of Conisthorpe was not usually so reckless. Certainly she ordered the demesne as skilfully as Lord Alan ever had and for the most part she chose her servants well. But had this outlaw a silvery tongue and a cheerful eye? She would wager he had cajoled his way into her mother's goodwill.

‘And another thing?’ Johanna swung round. ‘Why is this scholar of yours not tutoring some rich man's sons or employed honestly as a schoolmaster? What was he doing apart from trying to rob old churchmen? Poaching our deer?’

Catching Johanna's hands in hers, her mother exclaimed, ‘I am not such a fool as you think me. This man will serve our purpose, trust me. Where else can I find a stranger so swiftly, one who is willing to swear that he married you before Fulk did?’

Johanna tugged her fingers away. ‘Do you truly realise the enormity of what you are saying? You have asked some incompetent trickster to come and pose as my husband? Think about it, madam. Why would a woman of my status have espoused myself to a poor scholar?’

‘You could swear you fell in love. Besides, you have yet to meet him. You are judging the wine before you taste it.’

‘Of course I am.’ Johanna flung up her hands like birds panicked into flight. ‘I would not even buy this vinegary wine in the first place.’ She gave an angry sigh and gathered up her sewing and silks.

‘Supposing I were to arrange for you to meet him, Johanna?’ Her mother reached out a staying hand. ‘No, listen, go and bathe your face at St Robert's spring early tomorrow morning. This young man can meet you there. Then tell me yea or nay.’

‘What, go to the chase to be assaulted? Out of one cooking pot into another.’

‘The chaplain is embroiled in this?’ That reined in Johanna's galloping indignation. She folded her lips, pensively gathering the embroidery to her breast. What harm might it do? The old courage in her struggled for air. ‘I was thinking of visiting the holy spring anyway. It may help my bruises heal faster.’ Then she sighed, ‘But it will not do. Edyth will insist on accompanying me like a shadow.’

‘I will warn the man.’ Lady Constance began to unpin her veil. ‘I had better make haste if I am to let him know this afternoon. I hope he will agree to this. To be honest, he is not exactly enthralled by my plan any more than you are.’ That was scant relief.

‘But the jingle of gold, of course, is loosening the straps that binds his conscience.’

‘You are probably right, lambkin. Where is my cap?’ She searched through the untidy pile of garments on her bed. ‘I am thankful you are being co-operative at last. This man will be perfect for our purpose, and let us face the facts, Johanna, we are beggars and must ride whatever horse we can in this matter.’

‘Mother, he is a beggar and will ride us if we let him.’

Copyright Isolde Martyn
Reproduced with permission of Random House Australia. All rights reserved. No part of this excerpt may be reproduced or reprinted without permission in writing from the publisher.