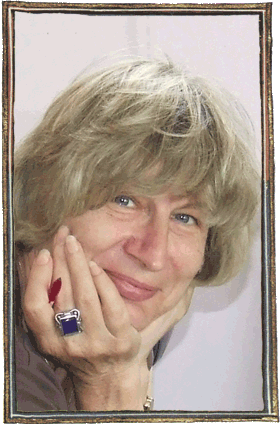 Writing historical fiction is a wonderful way to share a love of history.

With an English mum and a Swiss dad who both adored history, it was great for a would-be historical novelist like Isolde to grow up in London and then do a History Honours degree at the University of Exeter, with a specialisation in Yorkist England, her lifelong passion. But then… Falling into conversation with a rather dishy post-graduate guy at a bus stop in Dorset, she somehow found herself moving to Perth, Western Australia, a year later. She has since warned young women waiting at that particular bus stop of the geographical consequences of casual conversations.

In Perth, Isolde became an editor at WA University Press and also tutored in Modern European History. Moving to Sydney, she worked at Macquarie Uni as a research assistant and was heavily involved in the Bicentenary History Project, researching all the towns in Australia -- but she still wanted to be a historical novelist. Finally, before becoming a full-time author, she was a Senior Book Editor with Readers Digest General Books and edited the Motoring Guide to Australia, Foods that Harm, Foods that Heal and How to Fix Just about Anything.

Winning both a RITA-award (the romance equivalent of an Oscar) in the USA plus the mainstream' Romantic Novel of the Year Award' in Australia for her debut novel The Maiden and the Unicorn was a tremendous thrill and surprise after years when 'life' just got in the way of writing! Being married to a geologist, whose job took him away into the field a great deal, meant that for many years bringing up their two children always came first for her.

It should also be mentioned that Isolde is one of the co-founders and currently Chair of the Plantagenet History Society of Australia, now in its twenty-second year, and she is also a former Chairperson of the Sydney Branch of the Richard III Society.

Now, with eight novels published and a children's history book due out, she admits it hasn't been easy, especially when the places she writes about in her novels are the other side of the world, but she's had the support of a marvellous writers' group and a wonderful husband.

And, yes, Bus Stop Day is still an annual celebration!